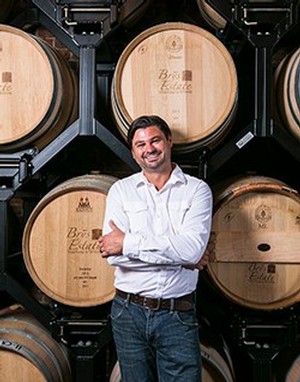 Coenraad Stassen grew up in the Western Cape, South Africa among the grape vines of the famous Cape Town wine region. His start in winemaking was a temporary position in harvest work in 1995 that quickly turned into a promotion and permanent position in winemaking. At the same time, Coen attended Elsenburg College (now named the Cape Institute for Agricultural Training) in Stellenbosch where he graduated at the top of his class in the Senior Cellar Technology program.

After eight years honing his winemaking skills in the Klein Karoo Region, Coenraad joined the international exchange program through Ohio State University in 2003, bringing him to Old Mission Peninsula and Traverse City - the place he now calls home.

Coenraad says "For me winemaking is an art and a passion. Old Mission Peninsula and Brys Estate allow me to make that passion a reality in handcrafting some of the best wines in the world!"

Brys Estate, under the guidance of Coenraad's winemaking, has earned over 500 medals in national and international wine competitions, including a Jefferson Cup for our 2017 Cabernet Franc Reserve at the 2019 Jefferson Cup Invitational Wine Competition, and "Best of Show White Wine" award for our 2017 Gewurztraminer Reserve at the 2018 Critics Challenge. Multiple double gold medals and the "Best of Class" awards have been attained for wines as well, most recently being our 2017 Signature Red Reserve, 2017 Artisan Dry Riesling, and 2018 Riesling Reserve, amongst others. Brys Estate also garnered three medals at the prestigious 2010 International Wine & Spirits Competition held in London, England for the 2007 Artisan Pinot Noir, 2008 Gewürztraminer and the 2007 "Dry Ice" wines.

Coenraad has a strong focus on producing high-quality dry reds and has a crisp, clean approach in producing whites. His focus is to be able to make world recognized wines from 100% estate grown Old Mission Peninsula AVA vinifera grapes from the Brys Estate vineyards.

"I like to make wines that are elegant and well-balanced," shares Coenraad, "that can be enjoyed with foods or all by themselves."